The Caspian Sea is the biggest enclosed body of water on Earth, having an even larger area than that of the American Great Lakes or that of Lake Victoria in East Africa. It is situated where the South-Eastern
Europe meets the Asian continent, between latitudes 47.07’N and 36.33N and longitudes 45.43 E and 54.20E. It is approximately 1,030 km long and its width ranges from 435 km to a minimum of 196 km. It has no connection to the world’s oceans and its surface level at the moment is around –26.5 m below MSL. At this level, its total coastline is some 7,000 km in length and its surface area is 386,400 km2. The water volume of the lake is about 78,700 km3.

The Caspian can be considered as divided into three parts, the northern, middle and southern parts. The border between the northern and middle parts runs along the edge of the North Caspian shelf (the Mangyshlak threshold), between Chechen Island (near the Terrace River mouth) and Cape Tiub-Karagan (at Fort Shevchenko). The border between the middle and southern parts runs from the Apsheron threshold connecting Cilov Island in the west to Cape Kuuli in the east (north of Turkmenbashi). 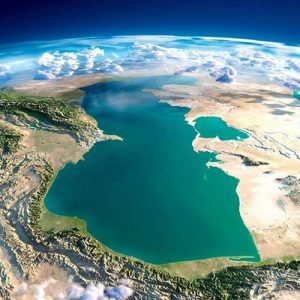 Approximately 130 large and small rivers flow into the Caspian, nearly all of which flow into the north or west coasts. The largest of these is the Volga River that drains an area of 1,400,000 sq. km and runs into
the northern part of the Caspian. Over 90% of the inflowing freshwater is supplied by the 5 largest rivers: Volga – 241 km3, Kura – 13 km3, Terek – 8.5 km3, Ural – 8.1 km3 and Sulak 4 km3. The Iranian rivers and the smaller streams on the western shores supply the rest, since there are no permanent inflows on the eastern side.

Apart from the extensive shallows of the northern part, the other two physical features that characterize the Caspian are the Volga and the Kara Bogaz Gol gulf.

The Volga Delta is situated in the Prikaspiisk lowlands covering around 10,000 km2 and the delta has a width of about 200 km. A feature of the delta region are the so-called Baer knolls which are hillocks, between 3m and 20m in height, formed by the action of onshore winds on the river sediments. These sediments are discharged into the delta at a rate of 8 million tones per year. Numerous small lakes can be found between the knolls and there is a complex system of channels with many islets. The Volga-Caspian shipping canal traverses the delta and is dredged to maintain a depth of no less than 2m.

The Kara-Bogaz Gol is situated on the eastern coast of the Caspian Sea and bites deep into the hinterland. It can be considered to be the largest lagoon in the world and is separated from the sea by sand bars. Until 1980, Kara-Bogaz-Gol was one of the significant evaporative sinks for the Caspian Sea. Historical outflow to the Kara-Bogaz-Gol between 1900-1979 averaged 15 km3 per year (nearly 4 cm). At the beginning of the 20th century, when the sea level was much higher, the strait between the Caspian Sea and Kara-Bogaz-Gol allowed a flow of 30 km3 of water per year to the smaller basin. During subsequent years, the flow consistently decreased due to reduced fluvial inflow and sea-level fall. In an attempt to retard any further drop in sea level, a solid dam was constructed across the strait in March of 1980. This dam effectively isolated Kara-Bogaz-Gol from the Caspian basin, thus preventing further outflow of water to the bay. This closure caused more than 40 km3 of water to be retained within the Caspian Sea and contributed an additional 11 cm to the rising water levels. As a result, the average
yearly rate of sea-level rise increased by 2.5-2.7 cm. In September 1984, a spillway was opened in the dam to permit some discharge of water to the Gulf. In June 1992, the dam was completely removed. This episode reflects the difficulty of anticipating natural

variations in the hydrologic cycle

and creating engineering works to counter this natural

The Caspian region lies in the center of the Palaearctic zoogeographical realm and is comprised of two major biomes – cold, continental deserts and semi-deserts in the north and east and, warmer  mixed mountain and highland systems with complex zonation in the southwest and south. There is also a small area around the Volga Delta in the west, where temperate grasslands can be found. The range of climatic conditions that prevail around the Caspian Sea have lead to a significant degree of biological diversity. This is further enhanced by the existence of extensive wetland systems such as the deltas of the Volga, the Ural and the Kura rivers and the hypersaline Kara Bogaz Gol.

The biodiversity of the Caspian aquatic environment derived from the long history of the existence of the sea and its isolation, allowing ample time for speciation. The number of endemic aquatic taxa, which is over 400, is very impressive. There are 115 species of fish, of which a number are anadromous and migrate from the Caspian up the rivers to spawn. The best known of these are the seven species and subspecies of sturgeon, which have been a valuable economic resource for over a century. Furthermore, the Caspian seal is one of only two freshwater seal species that occur worldwide; the other is found in Lake Baikal.

Recently, hybridization has occurred between the sturgeon from the Black Sea and those in the Caspian. This phenomenon can be explained due to the connection which is now possible via the Don-Volga Canal. While the precise effects this hybridization may have on the Caspian environment are currently hard to evaluate, the potential loss of diversity among the sturgeon species is a cause of serious concern.

Coastal wetlands, including temporary and permanent shallow pans, many of which are saline, attract a variety of birdlife. Birds are prolific throughout the year, in and around the Caspian, and their numbers swell enormously during the migration seasons when many birds patronize the extensive deltas, shallows and other wetlands. It is at these times that ecologically-motivated visitors could be guided into carefully selected vantage points and allowed to experience the beauty and the bounty of protected ecological resources. Such eco-tourism, carefully planned and managed, has tremendous potential both as an income earner and as an excellent mechanism to educate and inform the interested public, whether they are local or from overseas.

The Caspian Sea region is a major economic asset. It has large oil and gas reserves that are only now beginning to be fully developed. Oil reserves for the entire Caspian region are estimated at 18 – 35 billion barrel, comparable to those in the United States (22 billion) and the North Sea (17 billion barrels). Natural

Gas reserves are even larger, accounting for almost two-thirds of the hydrocarbons reserves. The region’s possible oil reserves yield another billions of barrels what is part of allure of the Caspian region.

Undeniably, the Caspian environment is of great interest for many people the world over: Scientists and technical specialists have been challenged by the Caspian unique nature

as the largest land-locked body of water on earth, the petroleum industry has been tapping its oil and gas wealth for decades, gourmets have extolled the virtues of its caviar and those concerned with ecological resources have recognized its valued biological diversity.